Is the World We Experience More a Perception than Reality?

An Objective Truth or a Subjective Illusion? 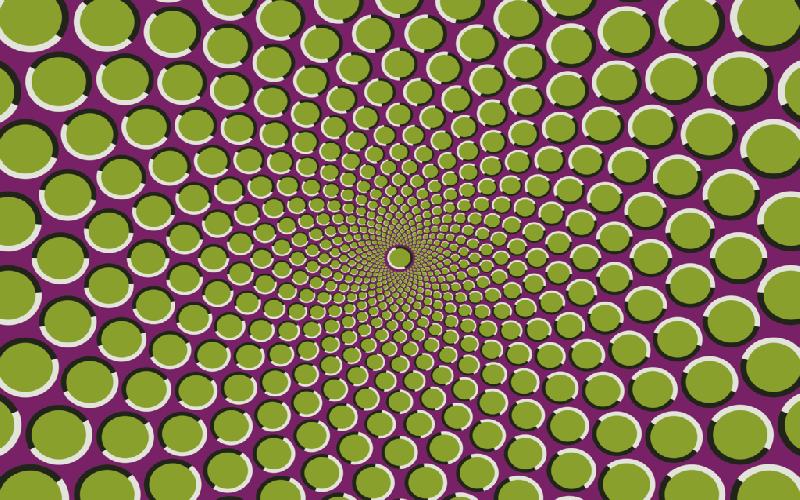 In the human world, the lines dividing reality from illusion are far hazier than what we generally believe. The universe is certainly real, but it is not necessarily the one that we experience. The illusions of perception abound in our life, making them actually a part of our very existence. Interestingly, an attempt to find out whether this world is real may actually change our perception about ourselves, as well as everything around us!

Recounting the daily occurrences will make you realize that we live in a world, which is constantly changing every second. Yet, at the end of it, nearly everything remains the same. In a span of 24 hours, we experience morning, noon, evening and night, and then, the next day, it is morning again. Every year we begin with winter, followed by spring, summer, autumn and then winter again.

In less than a century, we can have at least four new generations joining humanity, while as many say goodbye to us. Still, humanity continues as if it is immortal. And what about God… the almighty Lord of universe, whom no-one seems to have known, and yet nearly everyone believes in.

Is it any wonder that we live on a planet that is moving like a top and we are all moving with it!

Are our experiences derived from the objective realities of our universe, or are they only a perception? Surely, morning and evening are a matter of experience and perception. Which one you experience depends upon which part of the planet you are in at a given point of time. What you experience is not a position on the planet, but a part of the day. It is worth recalling that till scientists brought home the objective realities, our perceptions made us believe that the Sun revolves around us, and not the other way round.

This exemplifies the difference between reality and perception.

Reality is always objective. It is something that does not depend upon the characteristics of the individual experiencing it. So the rules of mathematics or gravity do not change depending upon whether you live in Africa or Antarctica, or whether you happen to be a young male or an aged female. Water is always water and heat is always heat. In fact, the Sun and the Earth are also objective realities, as are light and its absence, which we know as darkness. On the other hand, day and night are perceptions that we have learnt to experience.

May be, this is the reason that science relies less and less on human perception.

The underlying principle in all sciences is objectivity. When a scientist reports a particular scientific phenomenon or claims a particular result from an experiment, the same gets acceptance in the scientific community only when others are also able to observe the same. When there are differences, the report or the claim is not considered a scientific reality unless there is a clear explanation for the differences in their observations. Such uncompromising and relentlessness obsession with objectivity differentiates scientific reality from perceptions, thereby characterizing scientific temperament as the mainstay of our knowledge of this universe. Our life is filled with the achievements of objective scientific approach.

Many of us tend to look at science as a faculty for developing new gadgets and machines that make our life easier. However, that is a very narrow view of science, which is actually the search of humanity for truth. The gadgets, machines and technology that arise from this quest are only a byproduct of this quest. Ironically, in spite of our obsession with religion, it is difficult to say whether it leads to similar benefits or knowledge!

Our perceptions are the thumb rules by which our mind understand the information gathered by our senses. So strong sunlight is perceived as afternoon and the complete absence of light is perceived as night. This is why being in a dark room can create a perception of night even during daytime. Most of our perceptions are aligned with realities, though as the illusionary part becomes bigger, that alignment often gets diluted. When this alignment is largely diluted or lost, it gives rise to illusions.

Sun, water and mountains are all real, but not everything that we see, hear, feel or perceive is exactly as we perceive it. Perhaps, our dreams are the best way to look at our perceptions that are not real at all. They are illusionary experiences, created by our fertile mind, from our memories. Our imagination is another form of such illusion.

But Illusions are not always a creation of the fertile mind. They can also arise without an active mind intent on weaving them. Mirages are one of the best known examples of such illusions. Often seen in deserts during warm noon, it consists of an appearance that is perceived as water, when there is none. Another illusion is the rainbow – the multicolored semicircle in the sky after it had rained, is one of the most beautiful things of nature, but is hardly real. The nature is full of such illusions. Camouflaged insects and animals can also be counted in this category.

In fact, you do not need to visit a desert or the forest to experience illusions. The internet is full of optical illusions and in case you have not come across one, you can search hundreds of them with a click of your mouse. Another common instance of illusionary perception is the movie that you watched last weekend. Nothing in it was real and you know that very well, yet you may have watched it with an intensity that belies such awareness. We know that nothing happening on screen is real, yet, we experience and enjoy all emotions in the same way as if it was real.

An even closer illusion in real life can be the man or a woman who is able to convince you that he or she loves you, but may actually care about you just as much as the cockroach living in your drain. The realization that such love was actually an illusion can become the lasting experience of one’s life!

In fact, most of our sophisticated, finer, abstract experiences like beauty, love and happiness are not objective in nature. Same is actually the case with most of our instinctive experiences like hunger and pain. One can sit with a hungry person for an hour without getting any idea about what he is experiencing!

The saying that beauty lies in the eyes of the beholder makes it apparent that beauty is a less than objective concept.  One cannot measure beauty by objective criteria, nor can anyone be certain that a thing that appears very beautiful to one person will appear similarly beautiful to another. In fact, concept of beauty has been changing with time. Perhaps, this is why wise people point out that beauty is only skin deep! Another very subjective concept is the perception of greatness. There are hundreds of different views on what greatness means. At times, it can be challenging to find two people having exactly the same opinion on such matters.

Philosophy is the Awareness of difference between Reality and Perception

The haze of our illusions has been uncovered by the philosophical mind that wants to find the truth. So a philosopher points out that money can only help you buy goods, not happiness. Even a billionaire can only eat about as much as a destitute, and may actually end up being less content than him after having that meal, irrespective of whatever he may have spent on it. Contentment may or may not come from one’s bank balance. On the other hand, contentment as a state of mind can possibly be achieved without a penny in your pocket, as our saints have demonstrated so aptly.

The difference between reality and perception is not just a theoretical issue. It actually affects our life in practical ways. We keep running all our life, mostly without realizing why we are doing so. We work hard for a better tomorrow, but do not always know what that ‘better’ is!

Modern Economy is an Illusion in itself

Our illusions and perceptions are not limited to individuals, but also include fictions that we convince ourselves in accepting to such an extent that we begin to treat them as real. The modern economy that has worked wonders for us is actually full of such illusions.

One such illusion that occupies the central stage of our world is money. What we call money is actually a fiat currency, like the paper dollar. This piece of paper is neither good for food, nor can be used as fodder, yet it remains the most valuable thing in our lives, just because we have all agreed to share the illusion regarding its value. Whenever this illusion is disturbed, there seem to be a crisis. Thankfully, our collective perception of such crisis is strong enough to preserve this collective illusion. Even then, monetary authorities and governments keep striving in tandem to ensure that our collective illusions are not disturbed.

In fact, our economy is based on many such illusions. Equity market and the share prices are another example. It is on the basis of illusions of ‘value’, ‘wealth’ and ‘expectations’ that even without producing a nickel, additional wealth of millions of dollar can be created in a matter of a trading session, and conversely, similar amounts of ‘wealth’ can disappear in thin air, without anything destroyed in the real world! We seem to have evolved to a stage where we can imagine wealth in such a way that it becomes worthwhile living and dying for that illusion.

So What to Make of this World?

The world that we live in is not just an illusion. There does exist a world that is objective and very real. However, that is just not the world that we experience every minute in our life. In the objective world, a human being is nothing but trillions of atoms of carbon, nitrogen, oxygen and hydrogen pulled together. It is an objective reality, but that is not what we see, observe or perceive. What exists is real, but what we experience is a perception, an illusion of sort. Some illusions are shared by us collectively, many others only at an individual level.

Experiencing the real objective world, unaffected by the sophistications of human mind may not even be very useful in our day to day life. However, what is far more important is the awareness that there is an objective reality that is not the same as our perceptions. Knowing the limitations of our perceptions and the dangers of our illusions, whether individual or collective, is what gives us the wisdom, like that of a scientist or a philosopher, and enables us to enjoy our illusions without being blinded by them, just like we do when watching a movie! 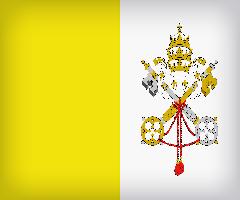 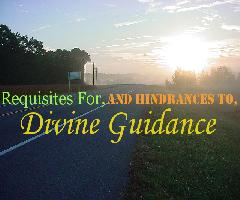 Requisites For, And Hindrances To, Divine Guidance

God desires to help and guide each one of us. Let us look at a number of things that will either help or hinder us from receiving God’s guidance..