Have you heard about Rani Abbakka, the gallant queen of Ullal? 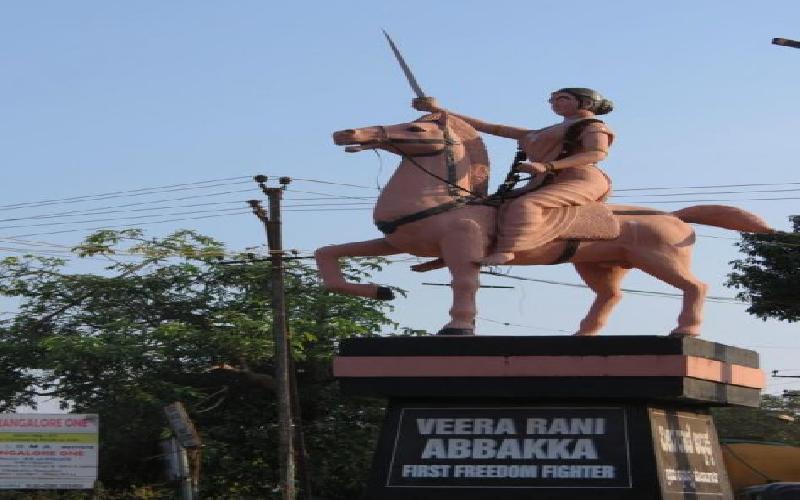 The gallant queen took on the formidable Portuguese during the middle of the sixteenth century. She defeated the Portuguese time and again, but ultimately got captured by them due to her estranged husband. Know about the great queen of Ullal.

It was middle of the sixteenth century. There was political instability in South India and in West India. Portuguese businessmen and marauders were taking full opportunity of this instability. They had defeated the Zamorin of Calicut and the Sultan of Bijapur. They forcibly took away Daman from the Sultan of Gujarat and captured Bombay (now Mumbai). Goa was the headquarter of the Portuguese force.

The ancient Kapaleeshwarar Temple at San Thome was destroyed by them and a church was built over the destroyed temple.

After that, the Portuguese targeted the very prosperous port of Mangalore. But there was a resistance at an insignificant place called Ullal, which was located at 14 kilometer south of Mangalore. This small settlement was being ruled by a 30-year-old Tuluva Jain queen, Rani Abbakka Chowta.

Initially, the Portuguese did not give much importance to the queen. They sent a small naval force from Goa consisting of few boats and some soldiers to capture Ullal. The boats and soldiers didn’t return to Goa. Then they sent a considerably large fleet under a very famous Admiral Dom Alvero de-Silveira. But the fleet suffered badly at Ullal. Very few soldiers returned. The Admiral somehow managed to escape to Goa badly injured. Another fleet was sent. Again very few soldiers could return from Ullal. So, the Portuguese were forced to capture Mangalore taking a circuitous route avoiding Ullal.

The Portuguese could not forget their insult by the queen of Ullal. From Mangalore, they sent a huge land force under General Joao Peixoto to capture the settlement. Rani Abbakka Chowta left the kingdom with her force. The Portuguese force entered the town without any resistance. They lowered their guard and started moving in the settlement casually. Suddenly, the Rani attacked the Portuguese soldiers with around two hundred of her best soldiers. The unprepared Portuguese could not stand the fury of enraged Rani and her soldiers. General Joao Peixoto was killed along with another seventy Portuguese soldiers and others fled towards Mangalore. Rani and her soldiers followed them and attacked Mangalore the same night.

This young queen with fiery spirit entered the Mangalore fort. Inside the fort her soldiers killed Portuguese Admiral Mascarenhas, the Garrison Commander. Not only that, the queen also attacked the Portuguese settlement at Kundapara at a distance 100 kilometer from Mangalore.

The great queen was ultimately captured by the Portuguese with the help of her estranged husband. She was later killed while trying to flee from Portuguese captivity.

TAGS : Historical personality Gallantry Great queen of India Indian History Medieval Indian History Portuguese in India
Let us know how you like this article. Like it and Rate it below.
114 3
0
Thanks for rating this article
0 stars - by 0 user(s)

I am a middle-aged man, who loves to write on various subjects. I have varied interest.

A world with many religions...